FROSOLONE, a small town located in the mountains of the hinterland of Molise, is a town of knives. In fact, the manufacture of steel represents in centuries the peculiarity of the town, that made famous in the world. Until the end of the 60’s of the twentieth century every alley of the old town had more than one workshops of knives and scissors, that from the early dawn the clinking of hammers on anvils was the characteristic sound. Then these workshops were supplanted by modern industries in recent years then transformed to commercial companies. This activity was widespread in the past centuries, aside from Frosolone, also all over Molise: in Campobasso above all, but also in Ripalimosani, Limosano, Agnone, Longano. According to statistics of 1835, there were about 500 artisans all over Molise dedicated to the processing of steel. Today, Frosolone is the only center not only of the region but throughout the South, where they still produce knives and scissors. 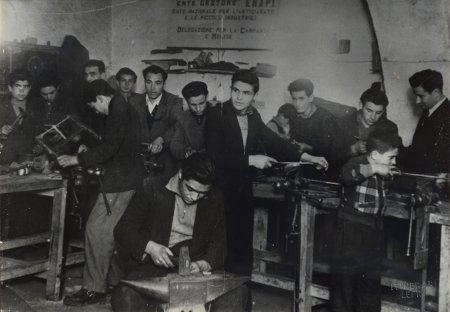 As for the origin, it is to be remembered that the SANNITES, the ancient inhabitants of this land, thanks to their ability to forge weapons, they resist for almost half a century from the Roman domination. It is said that this activity had begun between the fourteenth and the fifteenth century, under the family of Monforte-Gambatesa. The Monforte arrived in Campobasso in 1312 from France and one of them married Sibilla Gambatesa. These gentlemen, devoted to the art of war, probably forced their subjects to gain practice in the manufacture of weapons and metal accessories that was being used that time by the equestrian army, since that time Nicola Monforte required gunsmiths from his land. Subsequently, in the sixteenth century, under the domination of the Gonzaga, who sent gunsmiths from Milan, mainly by Don Ferrante, Duke of Guastalla and Count of Campobasso, generous patron of the arts and industries, these workmanships had a remarkable development. During this period, daggers, swords and other tools that were used to arm the militias, had acquired considerable renown. The workmanship infact was accurate and it was added the excellent hardening and sharpening. In 1750 an edict of Charles III of Borbone prohibited the manufacture of weapons and forced the artisans of steel from Molise to a sudden conversion of production and oriented them to the manufacture of scissors, shears, razors, penknives, knives and cutting tools for the arts and agriculture. In Campobasso these workmanships were replaced almost completely in the early nineteenth century by the introduction (due to Carlo Rinaldi) the techniques in processing of “ACCIAO TRAFORATO”.

The activity of the traforo became the specialization of artisans of Campobasso and the name Campobasso soon became famous throughout Europe, thanks for the participation of its artisans to the major national and international exhibitions where they received various awards. In Frosolone instead, where according to information derived from the land registry of 1780, there were as many as 20 “ammolatori”, the artisans began to specialized in the production of scissors and agricultural knives, pocket knives and that were often marked with the name of Campobasso taking advantage of the notoriety that had acquired on the International market. Even Frosolone didn’t lack artisans who were known for their skill in producing knives.To be remembered the name Giustino and Luigi Fazioli who recieved silver medal at the Naples’1828 exhibition. Over the years, from the end of 1988, there were several attempts to set up cooperative societies which had the primary purpose to improve economic and social conditions of the a participating artisans. Thus arose: the “Unione” of the factories of steel works, 1900-1907; the “Società Operaia”, set up in 1905; the “Società popolare frosolonese << L’Indipendenza>>”; the “Cooperativa dell’acciaio lavorato” 1907-1908; the “Lega coltellinai”, 1921-1923; the “Società cooperativa Coltellerie Riunite”, from 1944 to 1988. To the exception of the latter, all the others were short-lived. To the difficulties of partnerships, in fact, added two periods of deep crisis that hit the cutlery sector between 1908 and 1911 and between 1927 and 1933. These crisis were characterized by high numbers of emigrations of knifemakers and scissorsmakers towards other nations, particularly towards United States of America: during the first period of crisis over thirty artisans left the country. scatto_trisnonno Rocco Petrunti – Prima metà dell’800 Among those who left Frosolone were the brothers Michele (Mike) and Felice Miranda, in 1916 they founded in United States, in the city of Providence, what became one of the largest cutlery of the world, the IMPERIAL KNIFE, where many emigrants from Frosolone worked, and then they acquired and opened factories outside the US: in India, Japan, Mexico, Germany, France and England. We must also remember the brothers Federico, Domenico and Antonio Paolantonio who emigrated before 1912, founded in 1926, also in Providence, another great company, the COLONIAL KNIFE COMPANY. Despite the crisis and high emigrations, steel manufacturing kept on remaining the prevale activity in the country and in this regard it is enough to remember that in 1920 there were still eighty-six artisans still working with their own workshop: sixty-three of these were knifemakers and thirteen scissorsmakers. With regards to the antique models of Frosolonese

production, must be rememberd mostly the SWITCHBLADE and the so called AQUILANO ( this name was given by Francesco De Feo , in which he referred to an old artisan of Frosolone during the course of his research about the Molisani Knives, but I think this craftsman referred to the GOBBO Abruzzese).

It seems that the SWITCHBLADE was invented at the end of the eightenth century by the artisans of FROSOLONE, in fact the oldest specimens that reached us brings the name of the famiglie of the artisans of Frosolone. Usually they were larges dimensions with the handles in bufalo horn, a spring fixed with one scrounge, used for regulation of family or personal disputes, fights and duels. They were produced , with alternating events, until the end of the 50’s of the 20th century and often were not marked due to the prohibitions of productions, sales and detentions. The AQUILANO KNIFE is the most typical of the production of Frosolone. It is a folding

knife with rather bigger dimensions with a fix spring with more scrounge with straight handle or a little bit curved derived from a point of bufalo or cow horn, the section of rather large and rounded ends terminating with a beaklike covered with brass, fashioned with longitudinal stripes and rhonboid design and decorated with transverse bands of brass, with hearts, rhombus and shields of the same material or nickel silver embedded in horn or bone and also with with ringlets of bones similar to the “eyes of dice” in the knives of love. The blades with bevels just slightly evident, have fine tip and expand slightly in the chest with a small initial kick, also sometimes a false edge. They can also be decorated with etching. Such knives could not escape from the severity of the law of July 6, 1871 which punished not only to carry knives with fixed spring , but also who posses ,to sale and exposure. So the artisans of Frosolone were forced to a new reconversion of production, although some families of Frosolone produced the Aquilano knife until the early years of the twentieth century as seen in several examples that the tip of the blade was moulded into a disklike to protect the manufacturer from the rigors of the law. The models that came out from the workshops of the artisans of Frosolone after the law of 1871, known as SFILATO and ZUAVO, which is

still currently produce, have nothing to do with the Italian tradition. The name of the ZUAVO indicates a knife in use among the Zouaves arrived in Italy with Napoleon and is derived from knives produced in Chatellerault with the typical yatagan blade, a fashion after the Egyptian campaign. This simple spring knife was quickly adopted by the three great Italian productive centers (Maniago, Frosolone and Scarperia) for its characteristics conforming to the law of 1871 which forbade the knives with fixed spring . In Frosolone, French turtle handles was even imitated, subjecting the horn to a yellowing process using nitric acid and to a subsequent operation of dappling using a mixture of quick lime, minium and lye obtained from the boiling of vegetable ash. These handles “ tartarugati” became the hallmark and instantly recognizable as production of Frosolone, at the point that when the horn was replaced with plastic, they used yellow plastic sfilato storicodotted with black spots, just to somehow revive the ancient characterization of the handles of the knives of Frosolone. The SFILATO,

also with a simple spring, derives directly from the ancient SWITCHBLADE, but retains only its shape after the elimations first of the shutter button and the spring of launch, then the fixed spring, following the prohibitions of the law. It was produced at Frosolone on a wide scale since the late ‘800, becoming its main product to the point that was also called “FROSOLONE”. The SFILATO was later imitated both in Maniago and Scarperia. Other typical models of Frosolone production are the SFILATO A PUNTA TONDA ( round tip ) and the MOZZETTA ( spread after the Giolitti Law of 1908, which prohibited the manufacture, sale and detention of pointed knives with a blade exceeding 4 cm), PRUNING and the GRAFTING KNIFE used specially in the field works. We must also remember the GOBBO ABRUZZESE which owes its name to its shape as the handle was made of a curved point of the bovine or bufalo horn.